INFPs are underrated superstars. They're often at the centre of every cultural discussion. People love to talk about INFPs, how they dress, their ethics, and their beliefs. Everyone is fascinated by their dietary choices, how they live, and their unique self-expression. You see them in academia, studying various groups, religions, ideas, and communities.
They are both the makers of new culture and the students of new culture and the prevalent beliefs and ideas of their time. They can see any viewpoint or entertain any perspective. Their flexible, creative, and curious minds allow them to see people's depths with more nuance than most. They have the ability to find the root or the essence of an argument or an idea. 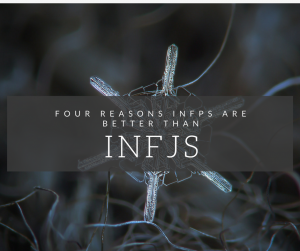 INFPs channel their intuition and feeling in the moment to judge questions such as, what is ethical and right eating, dress-code, speech, and behaviour in each moment. What is right for the situation, and what is good and bad, considering what I know about the people around me? The INFP is adaptive and focused on questions and concerns of the individual, what each person is thinking. They're true to themselves, whoever that may be in each particular moment, and their self-expression is rich and broad, and full of nuance. The INFJ may have a strong personality - but much less dynamic and often constrained by social expectations and personas.
2. INFPs listen - but don't tell you what to do
As an INFP, you're constantly absorbing any information you can find about other people. Their deeper intentions, feelings, struggles, and insecurities. INFPs see and listen, but often keep this information private. They become your silent allies, the guards that help protect the secrets you didn't even know they knew of. And INFPs naturally encourage you to share, and rarely intervene or tell you what to do. They help you find the solution that is best for you. And they show you that you deserve to be listened to.
3. INFP Giftedness and Intelligence
Sometimes marked as "less logical" than the INFJ, but truth is, INFPs tend to be among the top most common types to be gifted. their IF gives them an intuitive grasp of how the world works, and while this intuition is often dismissed, it is often very accurate. As NFPs, they are flexible thinkers that can see and entertain options and possibilities most people would miss, and as philosophers, they are naturally good in abstract and theoretical fields. I can't say this for sure, but I think INFPs are actually more common in academic settings than INFJs. Because they are more gifted at disciplinary thinking (TJ) and they are better at following and applying an academic discourse.
4. INFP Cultural Capital
INFPs are far more cultural than INFJs. They have richer, more elaborate cultural identities, and are more rooted in their culture and the community. They are often gifted reporters that can navigate any culture and know the ins-and-outs and the quirks of the many groups, sub-groups, and communities they live in. INFPs are often the building blocks of society, the people everyone wants to protect, but in secret, it's because everyone depends on the INFP.
In times of crisis or great tragedy, we all need an INFP to help us make sense of it. In times of struggle, we all need an INFP to see us. In times of new cultural clashes between different religions, ideas, and cultures, we all need an INFP to help us find new balance. People may laugh, judge you, and dismiss you early on, INFP, but you bring out great change in people and in the world. You bring out insights and show people truths others would rather ignore. I'm surprised more people aren't flocking to want to be INFPs. Perhaps they're scared?
If you're an INFJ, like myself, don't feel bad. We also have our share of good qualities. I recently wrote an article about the top ten reasons you should have an INFJ friend in your life. Here, read it. 🙂

INFJ vs INTJ - The Wanderers

Accepting and trusting your voice as an INFJ

Ten Reasons You Need An INFJ Friend In Your Life