Technically, the introverted and thinking is predisposed to “introverted” “thinking” as their dominant function because, as an introvert, introversion is an energetic mental action of towering up, a mapped, compass-based form of thinking and processing information and making decisions. And as a decision making type, thinking makes one value hard, firm, objective, impersonal judgement, as it gives one more power and a heightened confidence and sense of self-importance.

ESFJs are not introverted thinkers

An ESFJ is an “introverted” “thinking” type under anxiety – the ESFJ enters into introverted thinking in an unbalanced, affective, unstable way, and their use of the function makes them feel like they’ve left home and entered a foreign environment. Their use of thinking feels too cold, too hard, too uncomfortable, but they use it because they need to assert themselves and because their normal power and their normal mode of operating does not support them in the current environment.
Anxiety is making them doubt their normal modus operandi, and their use of introverted thinking becomes a grip, a negative, perfectionistic self-evaluation. The ESFJ reviews their actions and decisions and grades themselves and decides that they suck. Introverted Thinking has a generally negative role on them – crippling them from action and keeping them from self-expression, where to the INTP, introverted thinking gives them power, confidence, stability, and security. INTPs look to math, data, knowledge and expertise to correct and perfect what they do, getting power to solve problems… ESFJs see it as a brake.

INTJs are not extraverted thinkers

Like in socionics, I acknowledge INTJs as introverted thinking types, only that the thinking here is influenced by a judging mentality – it is linear – it is organised – rigorous – systematic and principled. Where to the INTP, their thinking is multilayered, interdimensional, flexible, customised, and self-correcting. I do not see what Jung wrote on the cognitive functions as comparable to what the MBTI argued. Let me be clear. I don’t see an INTJ as an extraverted thinking type, as based on what Carl Jung wrote. I don’t think Carl Jung would agree with the MBTI on this. And finally, I don’t think we should think of Carl Jung and the MBTI as the same systems. They are not. 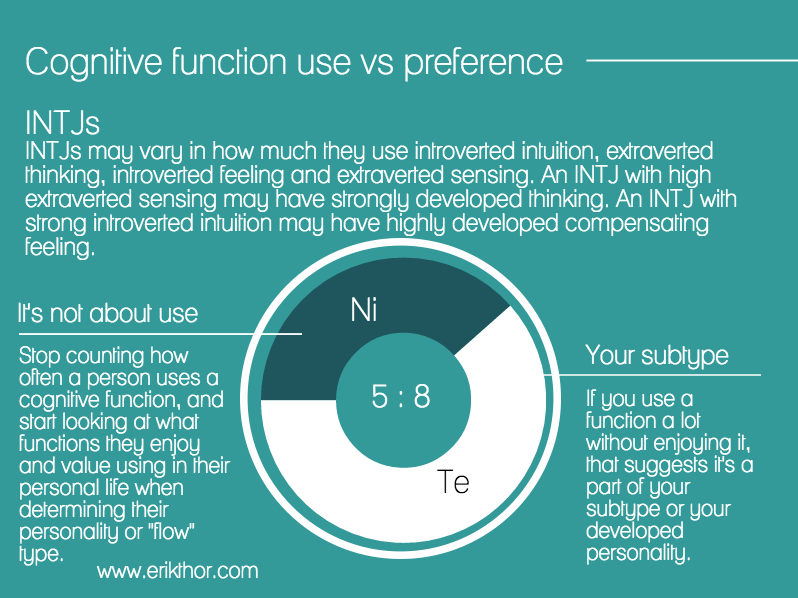 The hierarchy is wrong

It is not that an INTJ is 70% an introvert, and 30% an extravert, that depends on the individual INTJ. Some INTJs are very introverted, and some are more extraverted. But all INTJs have an introverted consciousness. Some are just more in touch with it than others, and those that are the most in touch with it, will be the most stable, calm, and balanced. We can forget who we are, and that will mean we’ll be less happy.
The dichotomies establish what your consciousness is: what your flow type is. Who you are at your best, and the cognitive functions establish how this flow type thinks, and makes decisions. I’ve outlined four different ways to express this flow type – four different life paths – four different subtypes. They all show that no INTJ is predestined to have this or that much of each cognitive function. But that cognitive function strengths vary in between the types. I hope this new dynamic way of thinking about it helps solve the issues of the traditional MBTI dichotomies without taking away from their advantages. I stand by that the dichotomies and cognitive functions depend on one another and that both are valid.
0 0 votes
Article Rating
Subscribe
Login
0 Comments
Inline Feedbacks
View all comments